Bar the remedy not the right 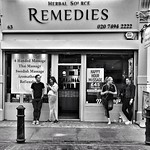 The issue of people being held on Manus or Nauru having their applications for medical treatment in Australia denied often receives media coverage. Likewise, there have been a number of cases where these people have made applications to prevent their return to Manus of Nauru. The short version of a long story is that there are several provisions in the Migration Act which are directed towards preventing litigation by these people (technically “transitory persons”) who are in the offshore processing regime .

Section 494AB is under a heading which says “Bar on certain legal proceedings relating to transitory persons” and the section starts with: “The following proceedings against the Commonwealth may not be instituted or continued in any court….[a list follows]”. My initial reaction was that this meant there was no jurisdiction (at least in the Federal Court) to entertain these matters. However, that’s not the view taken by the High Court in a number of cases heard together in Minister for Home Affairs v DMA18 as litigation guardian for DLZ18 [2020] HCA 43.

In essence,  High Court has found by analogy with the law relating to limitation periods that a statutory bar does not extinguish a right or underlying cause of action or affect a court’s jurisdiction. In other words if a bar is pleaded in defence then it would go to the remedy available not to the jurisdiction.

So, it would be on the Commonwealth to raise a 494AB defence to proceedings started by a transitory person. One of the issues with that is that the Commonwealth is a model litigant and the High Court has pointed out that the defence should only be raised when it was consistent with those obligations. It seems to me (possibly incorrectly) that this means that 494AB has very little “work to do”. This is an interesting but very technical decision.